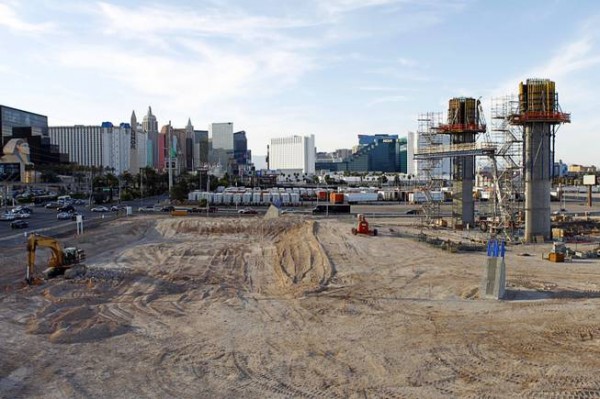 Howard Bulloch can peer over the top of Mandalay Bay from 500 feet above the Strip.

“When you think of the Strip, that’s the view people want to see,” he said. “That’s the attraction Las Vegas has for the rest of the world.”

Bulloch was looking out of a helicopter hovering above the southern Strip at dusk Monday evening, across from a parcel of land that he has owned with partner David Gaffin for more than 12 years. Little more than a year ago, Bulloch and Gaffinannounced plans for SkyVue, an observation wheel on the scale of the Singapore Flyer, or theStar of Nanchang in China or the London Eye.

“People had been talking about putting an observation wheel in Vegas for years, and we just decided we were going to do it,” Bulloch said

Down on the ground, two pillars now 60 feet tall point skyward, showingSkyVue is more than just so much talk. Today, the project begins the second phase of a $200 million construction that Bulloch promises will have a wheel towering over the Strip by the end of the year.

A dozen semi trucks are set to roll into the construction site this morning, bringing enough steel cable to stretch from the Strip to the Golden Gate bridge in San Francisco to serve as supports for the massive wheel.

Plans are to have the hub and spindle for the wheel in place by the end of summer. By fall, constructions workers will begin forging large pie-shaped steel supports around the hub for a wheel expected to carry passengers late next year.

“The engineering behind it is like a big Erector set,” Bulloch said.

The wheel is going over a base of concrete submerged some 14 feet into the desert floor, where cheap hotels once stood on land Bulloch and Gaffin have owned since Mandalay Bay was under construction. The wheel will be flanked on each side by huge LED screens the size of football fields, advertising restaurants and retail shops that are part of the development.

It’s no coincidence that cable trucks are making deliveries just as the International Council of Shopping Centers is holding its convention in Las Vegas. Bulloch spent the day visiting booths at the ICSC, pitching his 140,000-square-feet of retail, dining and entertainment space.

The company has not published many final details about Project Linq, beyond covering about 500,000 square feet with a wheel about 500 feet tall.

“The first one out will be the last one in,” Speigel said.

Big wheel projects have been floated for Las Vegas in the past but none materialized. Now, Bulloch has various government approvals, but not the money, while Caesars has money without final approval from the county.

The popularity of the 443-foot tall London Eye, which has attracted more than 3 million riders a year since 2000, has attracted a slew of imitators from Singapore to New Jersey to Myrtle Beach, S.C. The latest generation of Ferris wheels come with enclosed gondolas — 22 passengers each for Skyvue — instead of open-air baskets.

“The London Eye has been a tremendous success,” said Bulloch, who will model ticket prices on London’s. The basic ride would cost $20 to $25.

The Monday ceremony also highlighted that big wheels are not financially foolproof.

The bearing Bulloch displayed is a leftover from a Beijing wheel that was never built. According to a spokesman, Bulloch paid about $840,000 for the unused, secondhand bearing.

Bulloch said he has received letters of intent from potential tenants for 15 percent of the retail space. A letter of intent indicates a formal interest, but not a rental contract.

At least some of the early skirmishing between Skyvue and Caesars has revolved around location. By placing his wheel right on the Strip, at a slight angle to the street, riders will get a better view, Bulloch said.

“That is the real appeal, not being off the Strip,” Bulloch said.

“If I was going to argue location, I would rather have the center of the Strip than being on the end of the south end,” she said.