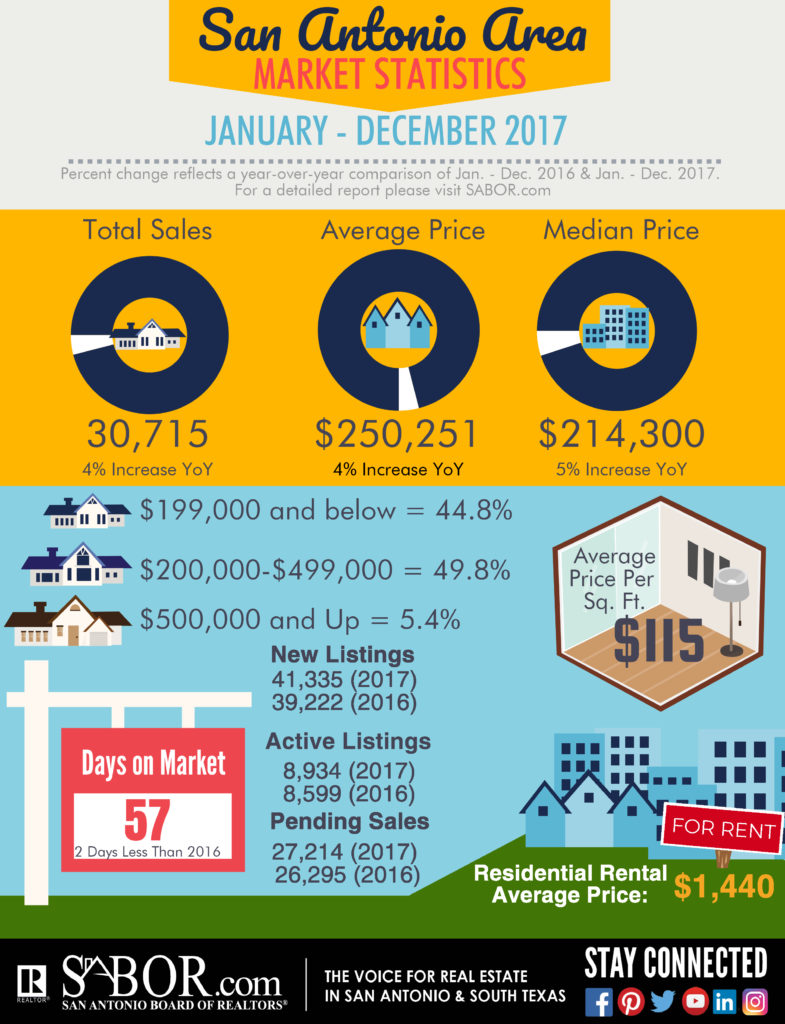 San Antonio – Once again home sales in the San Antonio area have rocketed past previous years’ records with 2017 reporting the largest number of home sales yet. A total of 30,715 single-family homes were sold in 2017, four percent more than in 2016 according to the Multiple Listing Service Report from the San Antonio Board of REALTORS® (SABOR) which reports on all areas contained within the MLS. The average sales price of a home in the area was $250,251 and the median sales price was $214,300, a four and five percent increase respectively.

“While it’s true that inventory has remained tight all year – below four months actually – buyers still were not deterred from jumping into the market and were attracted by the area’s variety of price points and property types,” said Lorena Peña, SABOR’s 2018 Chairman. “With so much interest in buying and selling property here, it is no surprise the year ended with such record-breaking numbers.”

In fact, every month except two in 2017 outpaced 2016’s total sales figures, with the most significant year-over year increase occurring in May with an 11 percent jump. Meanwhile, the market continued to favor sellers with the lowest inventory reported in December at just 3.1 months. At its lowest, days on market fell to just 48 days in August while on the high end both February and December reported 63 days on market.

“Despite increased demand, San Antonio’s housing market continues to be among the most affordable of the large metros in the state. We are very fortunate to live in a city with a strong economy and booming job market that help keep our housing market stable,” said Gilbert Gonzalez, SABOR’s Interim CEO.

Sales across Texas also reported moderate growth in 2017. Sales increased 3.9 percent year-over-year for a total of 313,274 homes sold in the state while the median price of a home sold rose to $225,000, a 6.1 percent increase.